The Best Places to Drone in Sydney 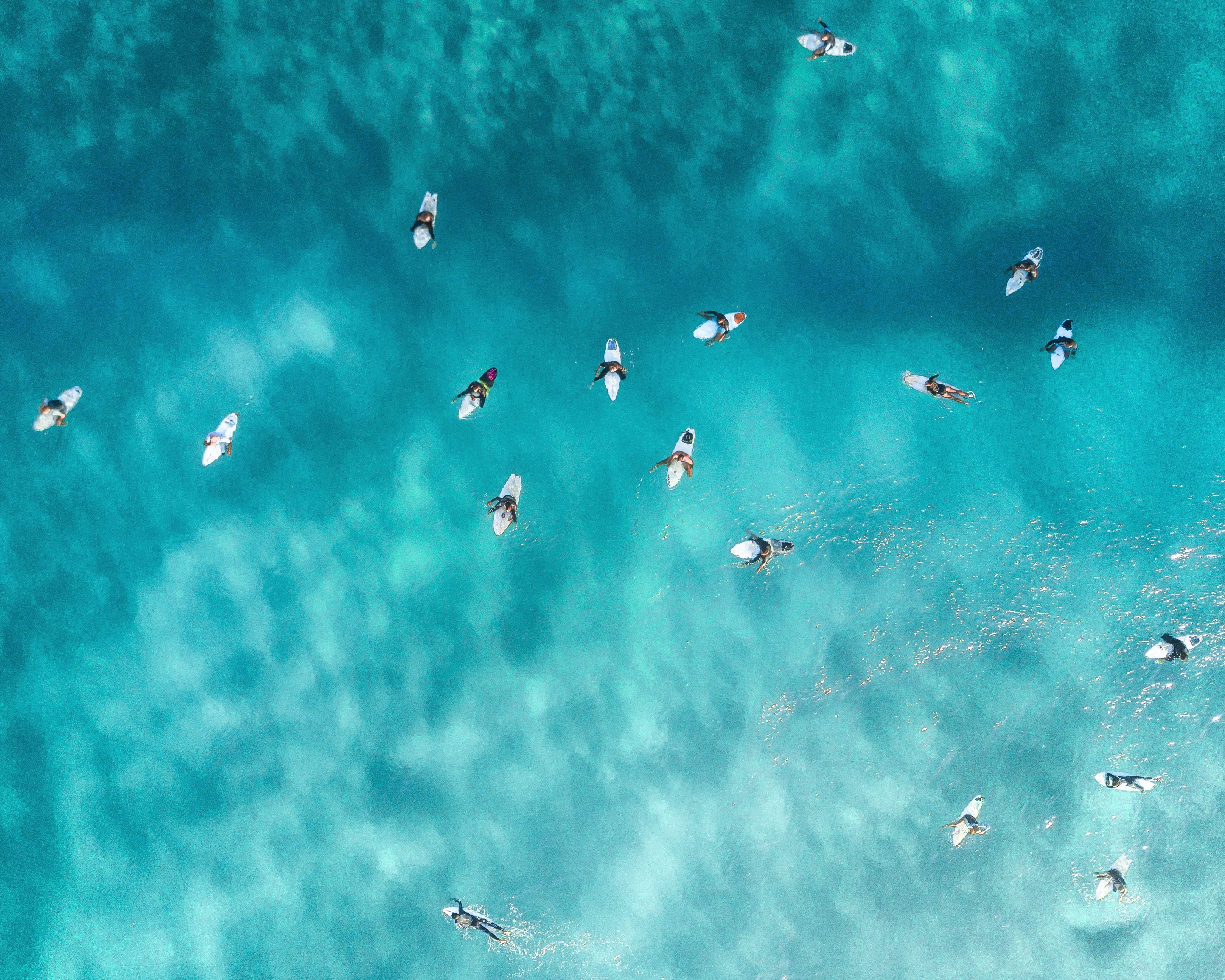 So Sydney (and the greater Sydney area) is probably the best place in the whole of Australia when it comes to a concentration of different areas to fly your drone... legally. I've sent plenty cameras skyward and I think Sydney has the goods.

So as an avid flyer of all sorts of drones, let me tell you about my secret spots and my not so secret spots. As well as the best times to visit and all the other good stuff. As you'll soon see by the list, it's mainly coast line orientated as it is Sydney, you know, the city by the sea. Flying in and around the harbour and the CBD isn't allowed anyway, it's a no fly zone. There are some ways of getting some city skyline shots legally too. If you're after that, just message me on instagram and I'll send you a few spots to fly from. So you can expect this list to be a little bias toward the ocean, given it's written by a self confessed ocean lover. But in all honesty, Sydney's best places to fly your drone are around the beaches anyway. So let's go on and have a look at some of those places.

Here's my personal favourite places in Sydney and the surrounding areas to fly your drone:

An Australian icon and an obvious selection. From the northern point at Ben Buckler, to southern point past Icebergs (pictured above). Bondi is just a hub for not just drone images, but photography in general. It boasts one the best beaches in the world, with some of the cleanest waves you'll find. The balance of colour between the sand the water makes for some the best top-downs around. You only need to see Icebergs at sunrise everyday to see how popular this place can get and for good reason. But it's the mix of city and sea which really makes Bondi a top pick. Do keep in mind there are 30m height restrictions in place as this place has some low flying aircraft cruising around.

Best times to visit: Morning during sunrise or Sunset. Amazing weather during the summer months but all year is fine too.

See more in our Bondi Prints 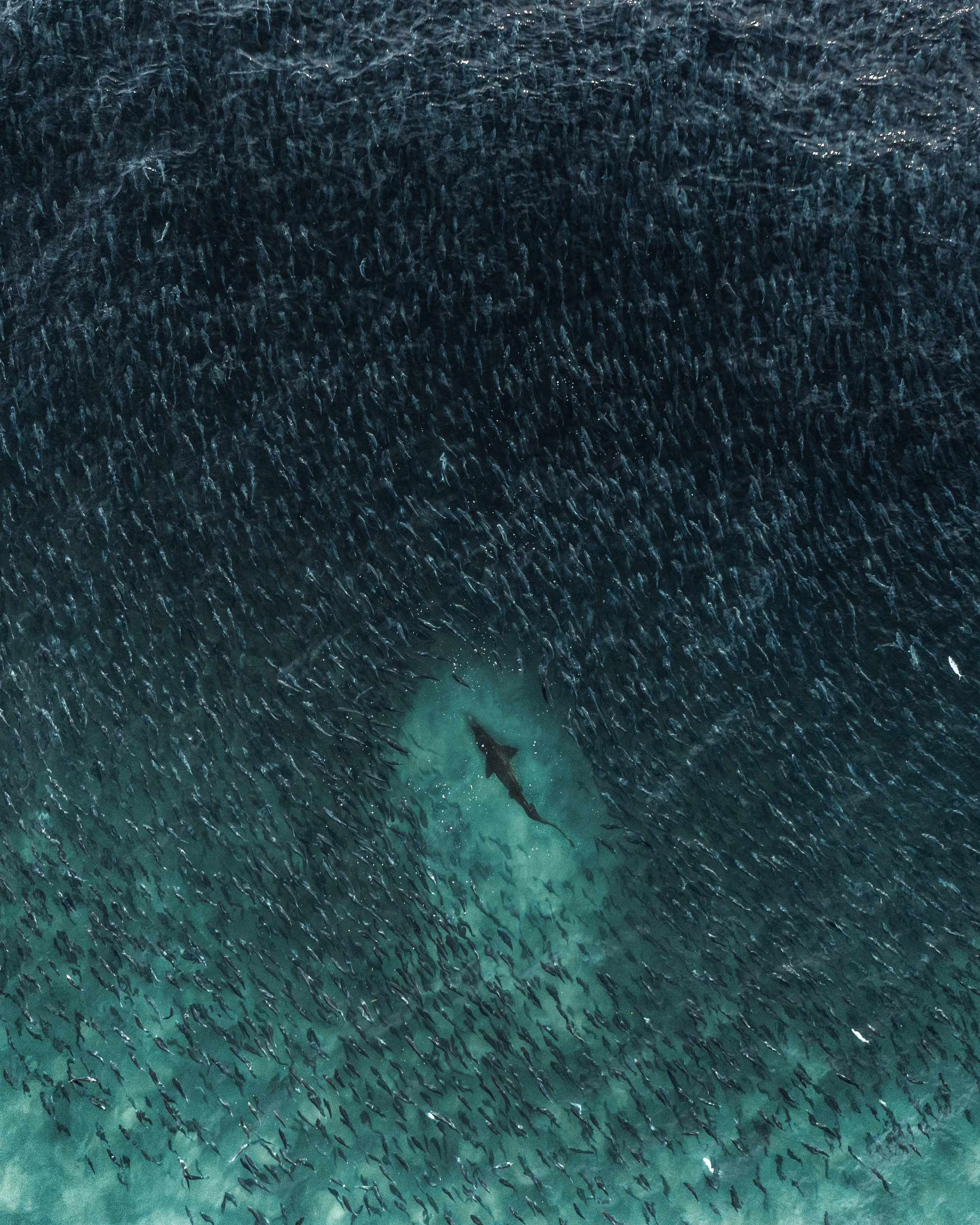 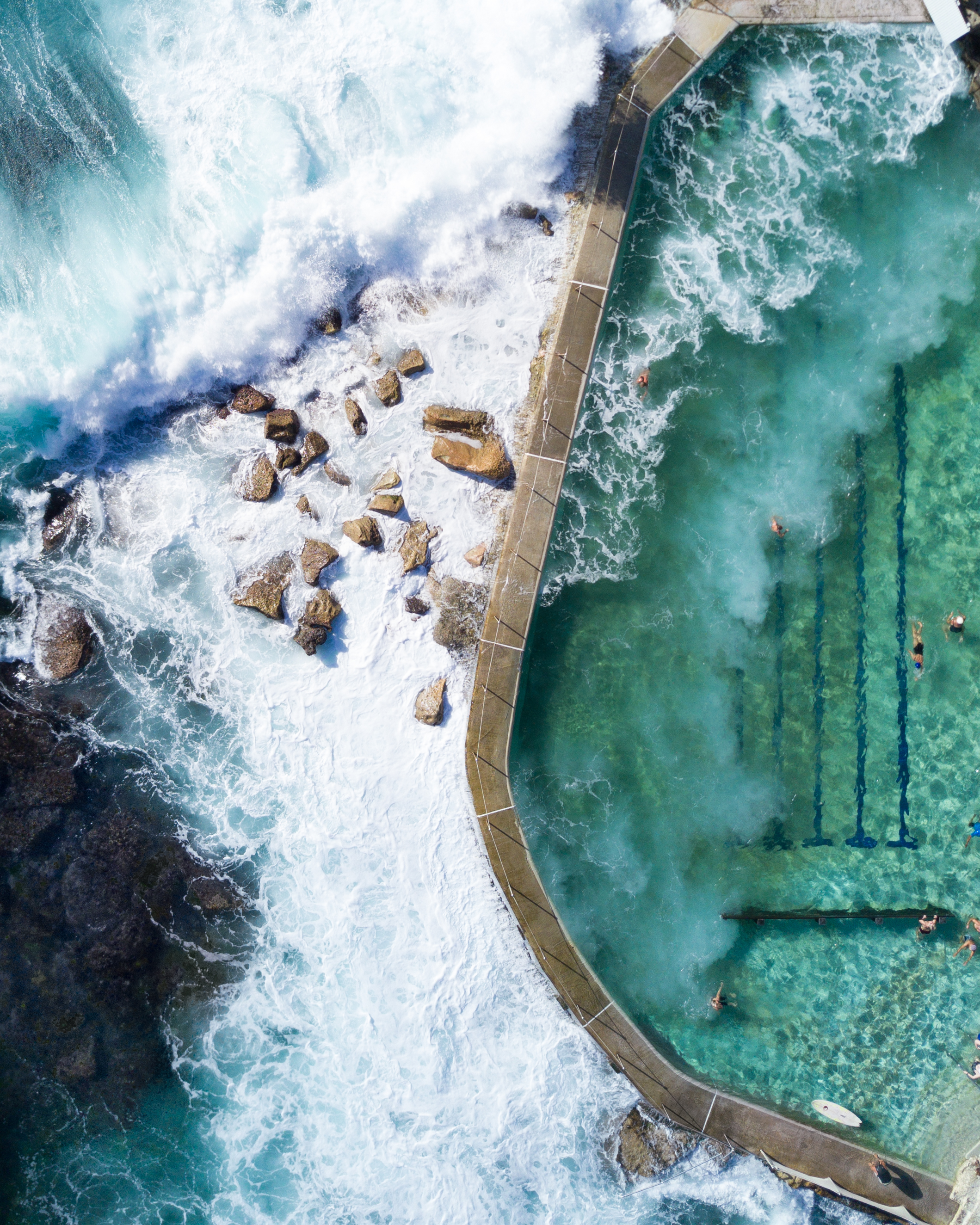 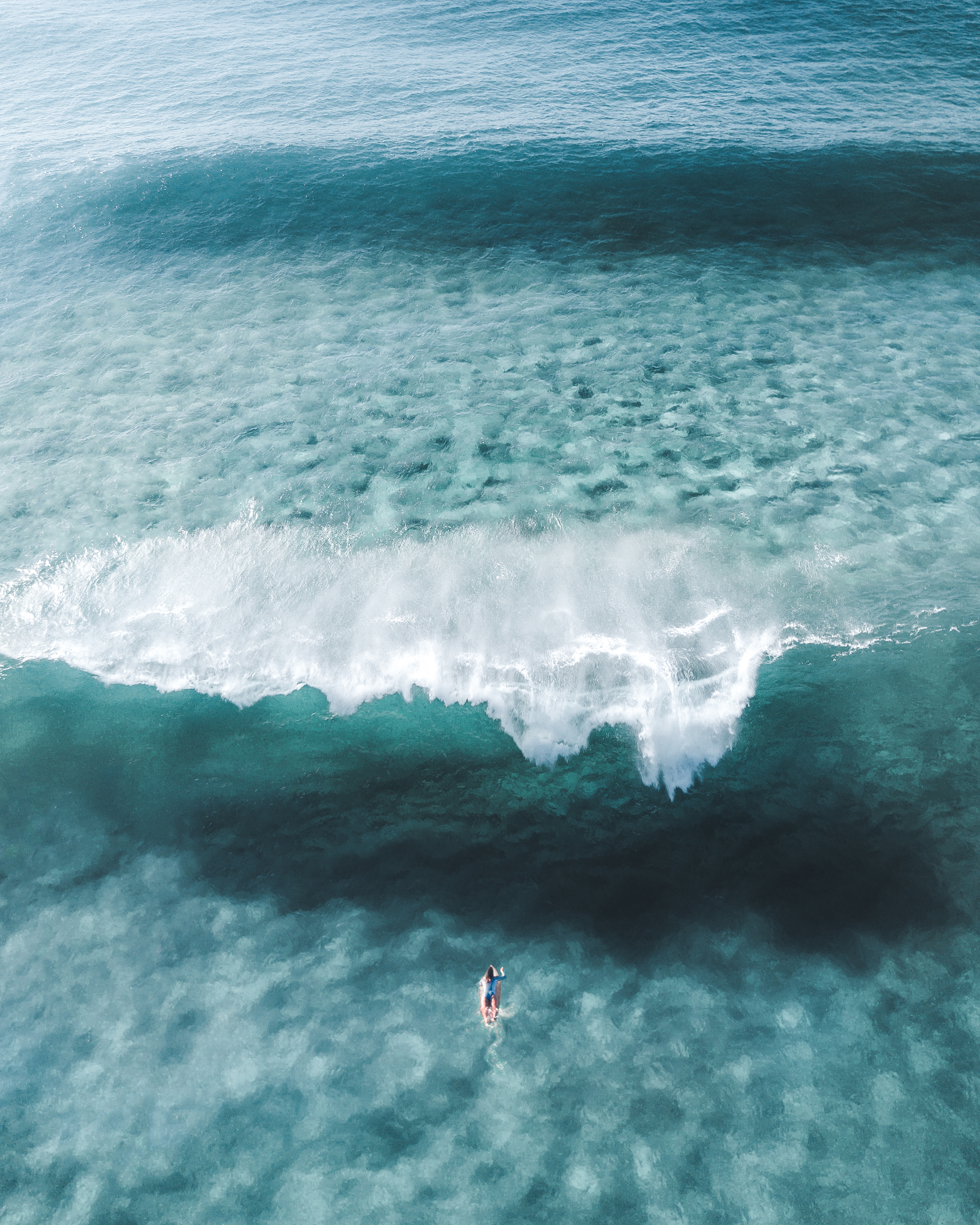 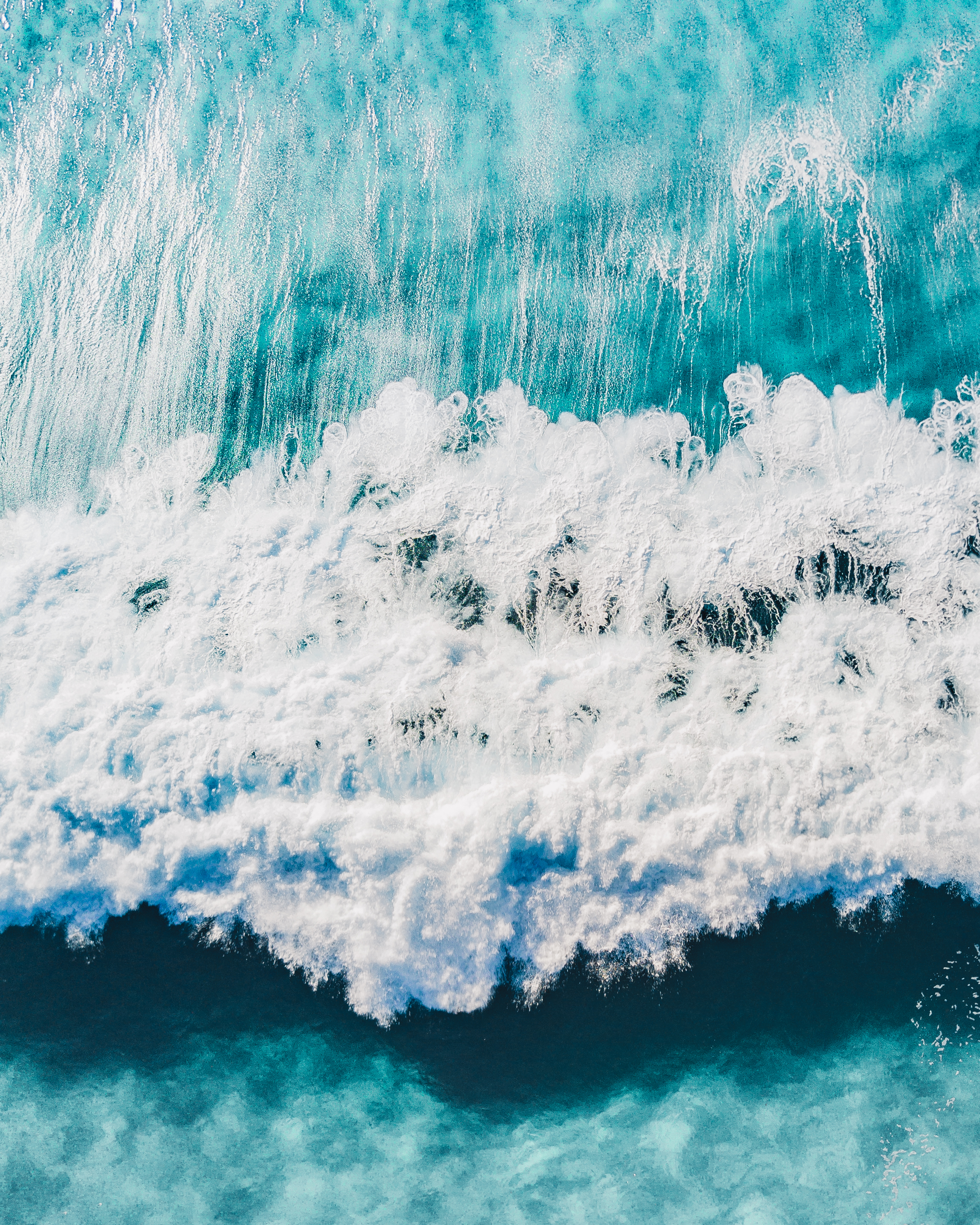 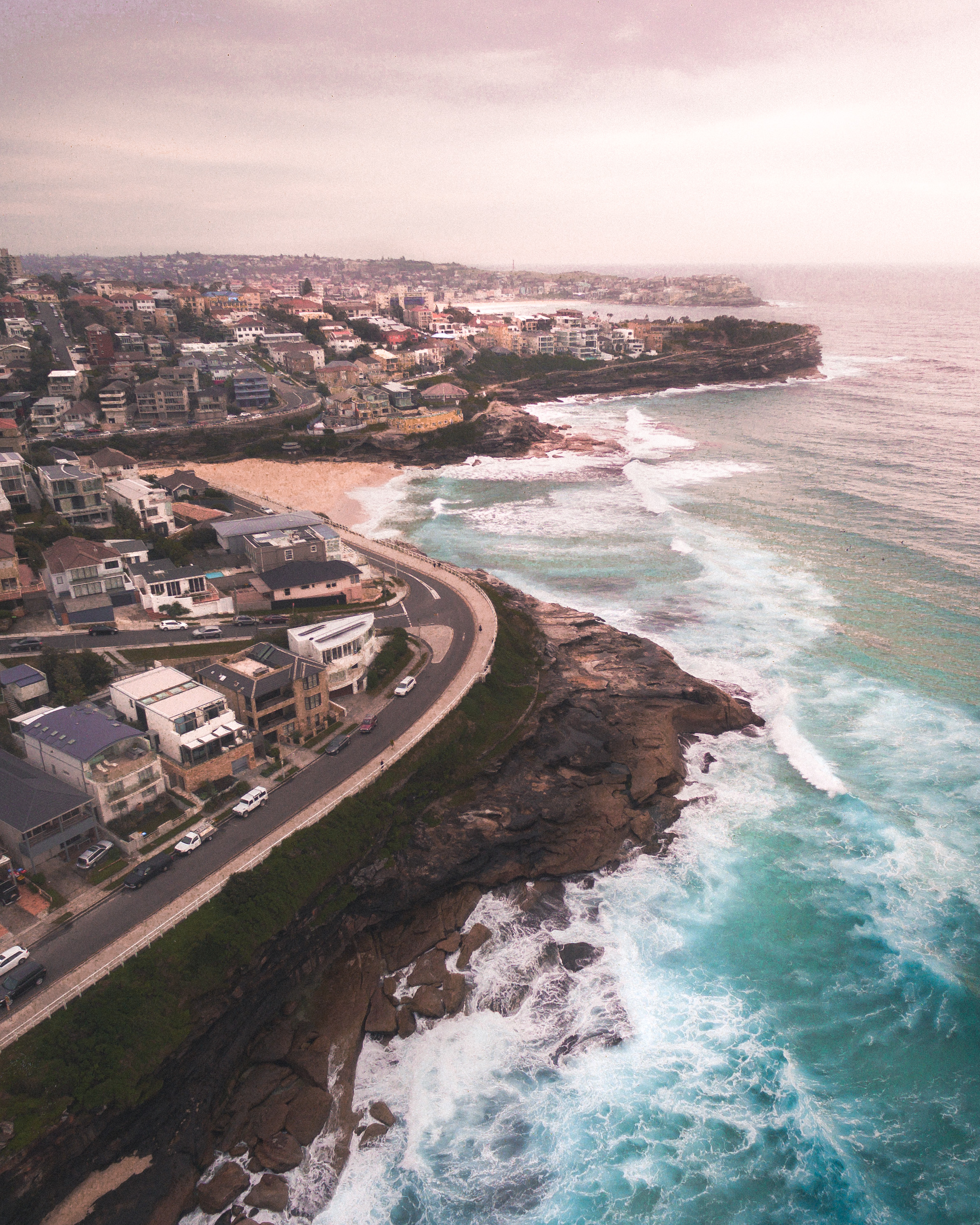 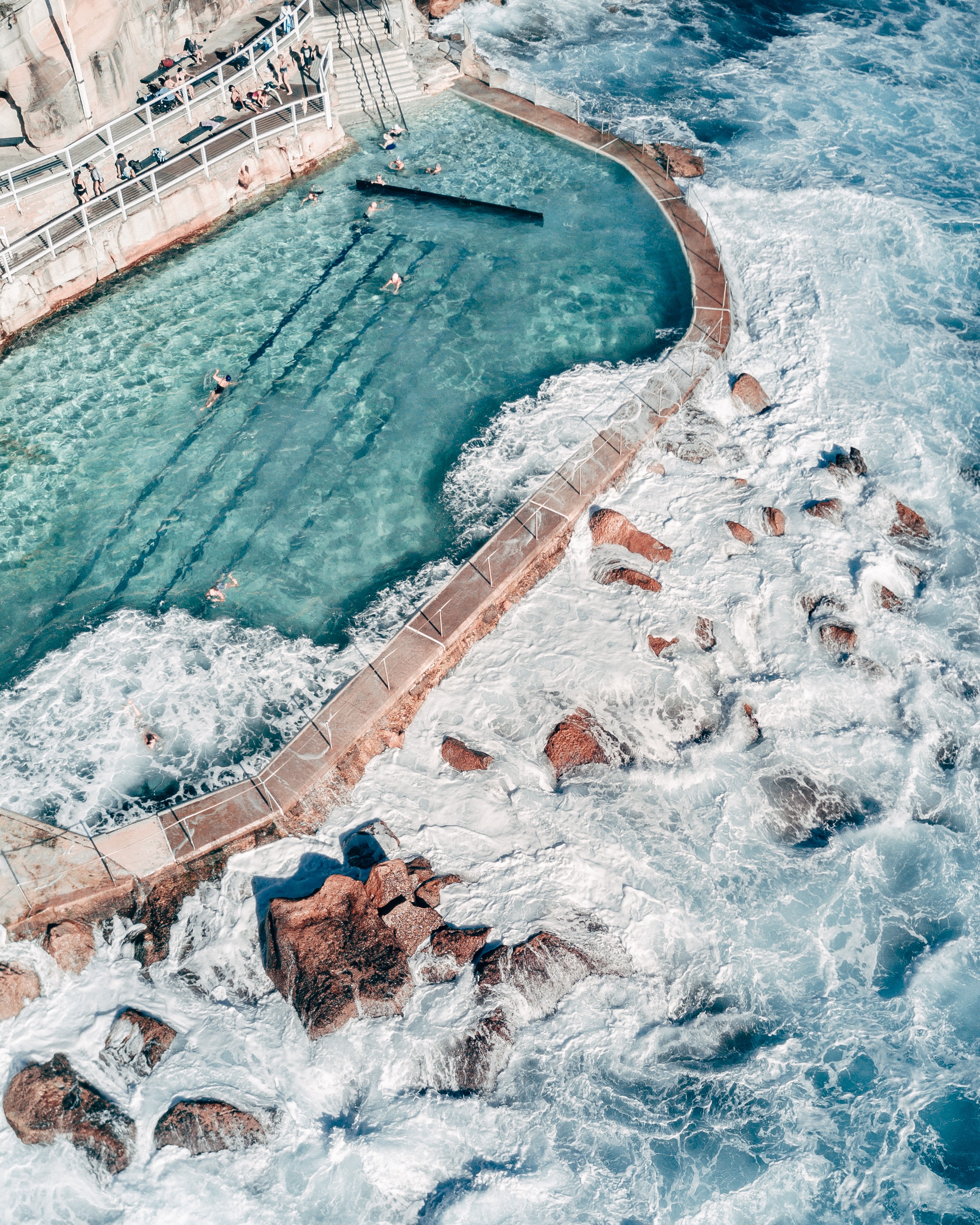 So these two are super close to Bondi, but for the sake of this article and also how big Bondi is, I'll leave Bondi on it's own and give Tama & Bronte their own props.

Both of these beaches are cute and small, but pack a punch when it comes to the beauty department. Because of their close proximity, you can pretty much sit on the waters cliff edge in between the two and fly to both these spots and get all the photos and film you need. The water is generally clean and clear as are the waves. You might spot a seal, shark, dolphin or even a wild local surfer. A fan favourite is surely the world famous Bronte Rock Pool.

Best times to visit: Morning sunrise or mid morning for some vibrancy in your top downs of the water.

From rock formations on the beach to rocks inside the pool, Curl Curl turns it on for all drone enthusiasts. You can walk around the north side toward the rock pool and fly from the high cliff edge, but take care it's a decent height to fall from. The pool is the main subject here, however I generally love how the sand meets the waves as it seems to always provide some amazing textures as the water falls off back into the sea. The colours contrast so nicely also as the sand here is slightly deeper shades of orange.

Best times to visit: Morning sunrise or mid morning for some vibrancy in your top downs of the water 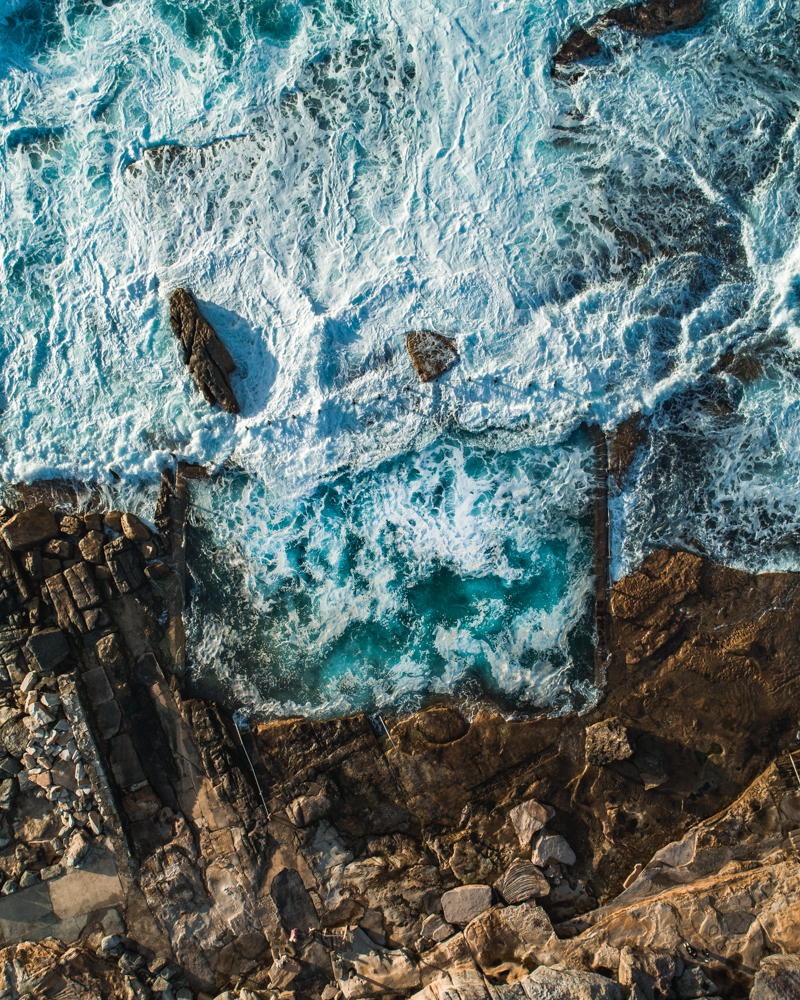 Mahon Pool is a favourite.

The pool shines blue on a bright day and the rock formations around it offer some amazing frames. You'll often have swimmers in the pool too. 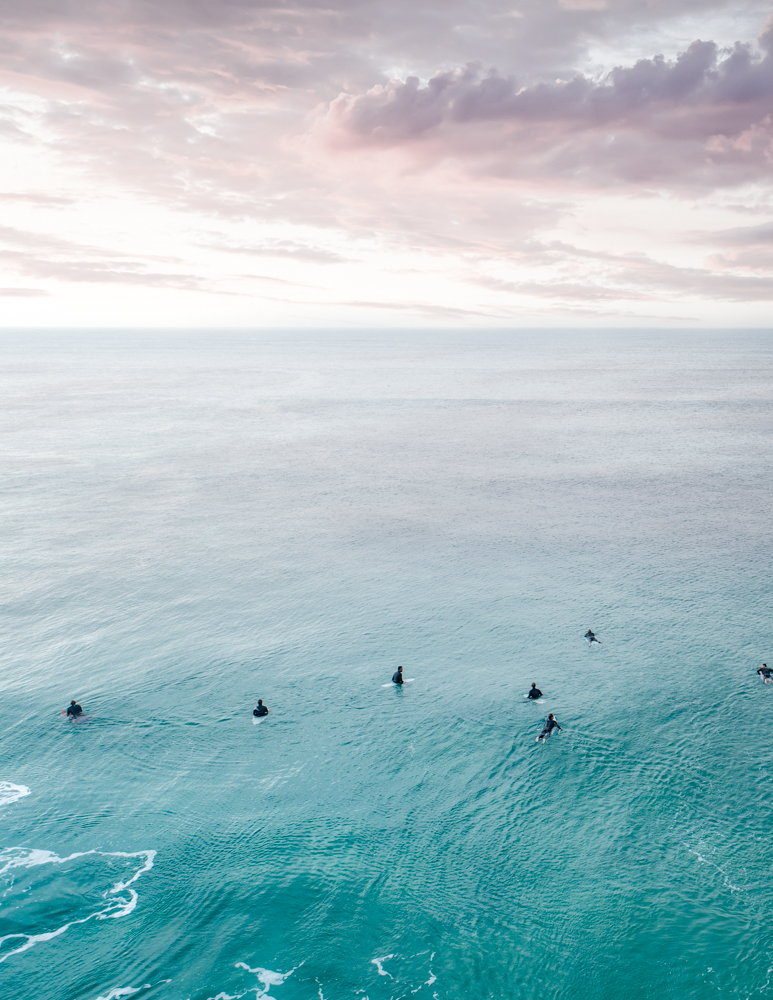 Not often visited by many drone goers, but top beach location all the same.

Best times to visit: Morning sunrise, be on the lookout for colour in the skies as this will help get the most out of the emerald clean water. 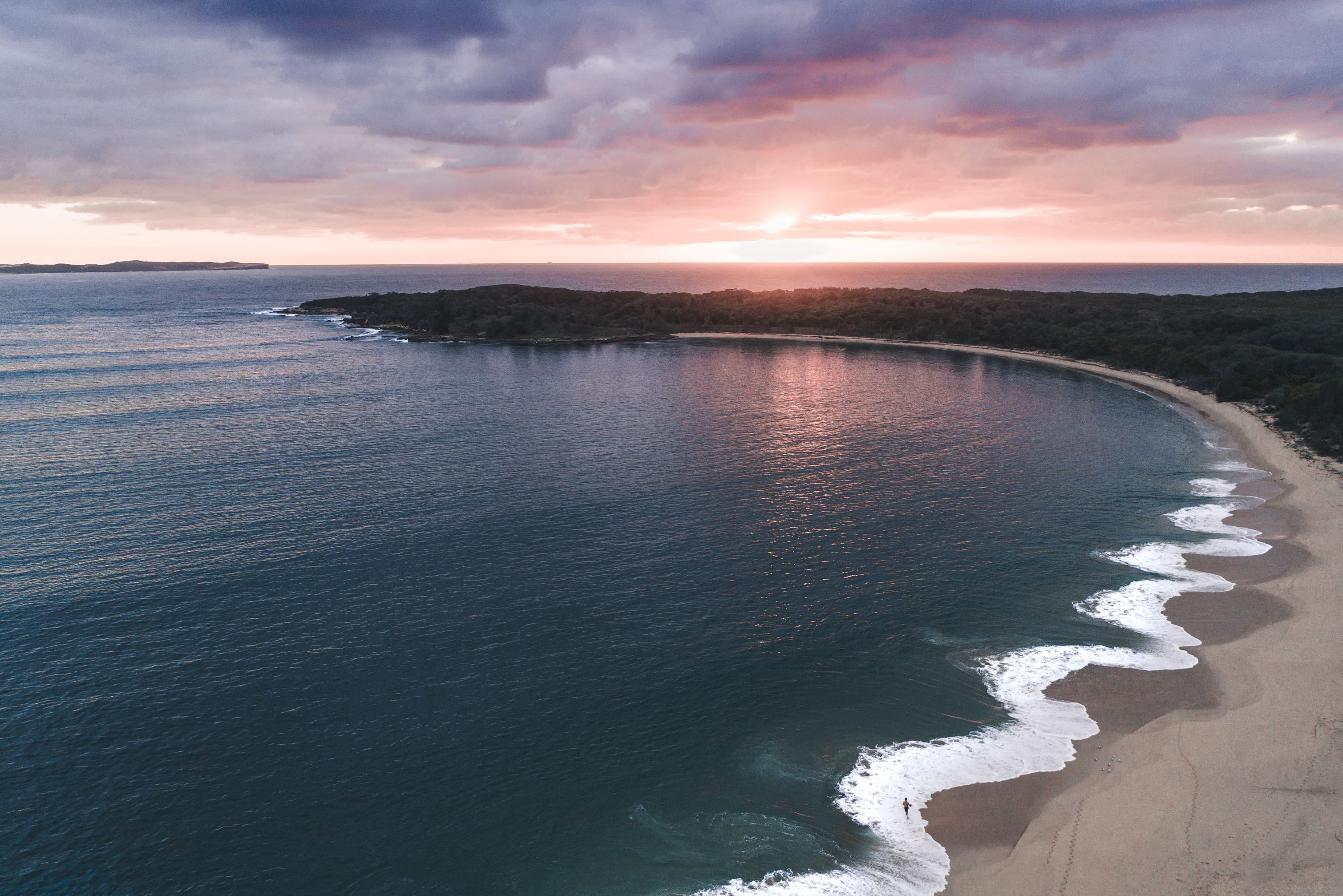 A hidden gem, a little drive from the centre of Sydney toward cronulla. The beach sits in a bay protected from the open ocean, so the water here is not very rough. But it does make for some beautiful lines in the wash along the sand. A extra tip is to also head to the sand further in land for some interesting compositions.

Best times to visit: Morning or afternoon when the light is good.

Some other notable omissions but very much still worthy of checking out is: Balmoral Beach, Mona Vale, Barranjoey Lighthouse, Cronulla and Shelly Beach.

Is there something I should have included? Feel free to let me know. If you want to see more from Sydney or Australia in general check out my instagram page: Ben Mack Instagram 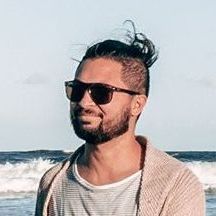 Ben Mackay
Owner of Ocean Feels from Sydney, Australia. A self-confessed ocean lover, creative and 'strongest man in the world' according to his kids.